What a crazy few days it has been!

It all started a couple days ago when we were SUPPOSED to go in for our 20-week ultrasound to find out if we were having a boy or a girl. Christine and I were so excited. We had the appointment scheduled on our calendars since the beginning of December and were just anxiously waiting for the day to arrive. But, Christine got the call that it was canceled due to the ultrasound tech being sick. I can’t blame the lady for getting sick, but what a disappointment that was.

It was working out to be perfect. I was working from home on Monday, the appointment was after the school day, so no one had to take any time off work. Oh well. So Christine rescheduled for today, just a couple days later. She had to schedule for a sub for the second half of the day and I had to take the afternoon off, but we were both glad to do it because we had just been waiting for this week to come and we didn’t want to wait any longer.

Then, I get a call from her about 20 minutes before I’m supposed to leave work. They canceled on us again! Christine worked herself up into such a tizzy that she called and requested that they figure something out for today since she had already taken the half day, I had taken the half day, and her Mom was already en route to Kent to come with us (for the second day this week). Luckily, they were able to fit us in at the Kent Robinson Memorial Hospital at 2:30pm today, but then after the ultrasound, we had to drive to the Ravenna Robinson Memorial Hospital (our main location and where Christine will deliver the baby) in order to meet with the doctor and midwife.

Christine had heard that if she drank orange juice that the baby would be active during the ultrasound – and boy was she ever! She was moving her little arms and legs all over the place. It was just really cool.

This was my third ultrasound and it was so incredibly cool. Right away the tech pointed out that it was a girl, and Christine and Margie all cheered and were so excited. I still had to process it. There was no disappointment, I just needed the tech to go through everything first to make sure there wasn’t anything wrong before I cheered.

The tech wanted to make sure I knew my anatomy, so she zoomed in on my soon-to-be daughter’s hoo-ha and proceeded to put a nice big arrow pointing right at it and printed it off for us as a keepsake. Sorry, but I will NOT be posting that picture on this blog. But I WILL file it away and use it as collateral against her when she’s older. (Insert evil laugh here)

The tech went through all of the measurements she needed to go through and was great at explaining what everything was. To me, most of the things she was pointing out just looked like a bunch of gray and black blobs.

Tech: “See this gray spot right next to this black circle, that’s the elbow.”

My response: “Riiiiiiight. Is it where it’s supposed to be?”

Tech: “See this round, black circle? That’s the stomach”

My response: “Neat. Is it where it’s supposed to be? Can you go back to the profile shot – the one where it looks like a baby again?”

The coolest part was seeing the spine, the profile, and to watch the beating heart and for her to point out that everything that was supposed to be there, was there. I’m not going to lie, I had horrible dreams last night that the tech was going to point out that my child had one arm, 3 legs and an ear where one of the eyes should be. Or, a real-life picasso painting. I was very thankful that the baby was doing well.

So, without further adieu, here is the latest photo of our little princess: 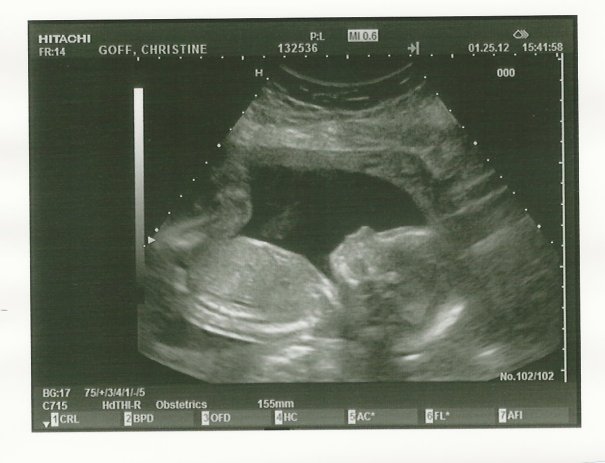 Isn’t she great? I thinks she has my nose.

I could not be happier right now. I have a niece, Lauryn, who I love to death. She is beautiful and sweet and funny and I think she takes a little too much after her uncle. 🙂 But, getting to know her has put this secret desire in my heart for a girl of my own. And I am just so excited to spoil my baby girl just as much as I enjoy spoiling my niece. I can’t wait to sing to her – “Brown Eyed Girl”, “Cinderella”, “Man-Eater”. Okay, maybe not that last one. But I will dance and sing and play with my angel and am so absolutely in love with her already.

Oh, and no, we haven’t thought of names or have any in mind. We are working on that, though. 😉

Posted in Awesomeness, The Daddee

My name is Goffzilla. I'm a dad to a beautiful toddler girl, handsome baby boy and a crazy cat, a husband to an amazing woman, and a home-brewer, music lover and technology nut. This is my life, and I'm loving every minute of it.